I try and go for morning walks as often as possible. And when I do so, I notice some elements are common everyday and some highly variable. There are some fellow walkers who are regulars and I see them around the same time that I go. And likewise there are some regular landmarks and places that show a similar state of activity at the fixed time. What I routinely see are the opening of a breakfast joint and a grocery store, a grandfather with his granddaughter at the bus stop waiting for her school bus, street cleaners beginning the sweeping of roads among other things. The route that I take has tall old trees at every landmark turn and I say hi to all of them as I pass by. It’s as if the day is starting out for them as well. Among my everyday regular events these days, is one superbly beautiful thing that I witness every day – a dense carpet of small white flowers below a tree at the turn. These belong to the Parijaat tree, and make for one of the prettiest sights you can ever witness. 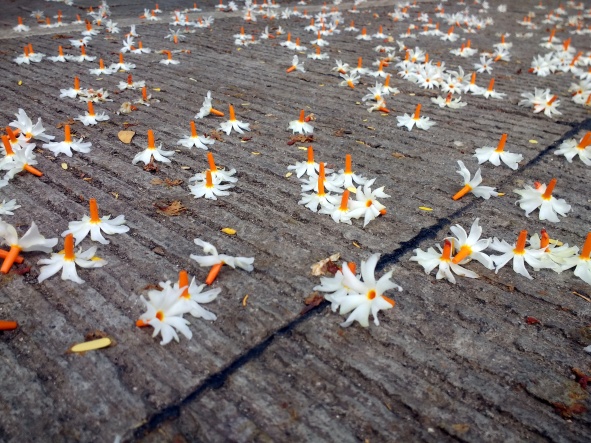 The Parijaat is a shrub like tree found in South and Southeast Asia and in many parts of India. In the Hindu mythology, this has a special importance since it was one of the valuables churned out during the Samudra Manthan. It is a tree that was initially planted in heaven by Lord Indra as per legend. There are several mythological stories associated with it.
This tree bears one of the prettiest flowers ever seen. These are small, white in colour and possess 5-8 petals. The flowers have a bright orange tip at the center and an orange coloured stalk. This combination of milky white petals with an orange stalk is very beautiful and I find the colours in general to be soothing to the eye. Indeed there is nothing more relaxing than looking at the mat of white and orange in various orientations on the ground beneath the Parijaat tree. These flowers are quite fragrant. The fragrance is not very strong; but is extremely sweet and soothing. It’s a reasonably long lasting fragrance and just like the colours and composition of the flower, has a calming effect on my mind.

The Parijaat tree in my neighbourhood

The most interesting part of this tree however comes from a different aspect of its flowering. The peculiarity of this tree is that its flowers bloom at night (dusk) and begin to fall at dawn. They are short-lived. The fragrance of these flowers also peaks at night and continues up to the wee hours of the morning. This tree is rightly called the Night flowering jasmine. And hence when you look at the tree during the morning, you will see a dense carpet of the flowers that had opened at the previous dusk and have now fallen off at dawn. If you look at it in the very early hours of the morning, you might be able to see the falling of the flowers. It generally falls one at a time, in a prompt way, in the most noiseless way possible. I have looked at this fall several times and have always been so mesmerized by it that despite deciding several times, I forget to record one as an example. If I manage it someday, I will share it here.

A few months back I read that this tree is actually called the Tree of Sorrow by some. Its scientific name is Nytcanthes arbor-tristis which literally translates to night flowering tree of sorrow. I found this somewhat weird. Turns out, there are a couple of stories which describe curses that were bestowed upon this poor tree because of which its flowers will not live long. Another story links it to an anger and sadness associated with the sun because of which its flowers fall off at dawn. Overall, there is a fair degree of sadness associated with this beautiful, rather mysterious tree. Somehow I have always struggled to accept this sadness. I often ask this tree, “Oh dear Parijaat, are you indeed so sad? Is it your sadness that is reflected through these short lived beautiful flowers that fall down at dawn? ” And the Parijaat, like a calm composed warrior; just smiled back.

The way I see it, the noiseless shedding of flowers by the Parijaat is more a reflection of its selflessness than sadness. It’s as if the tree can very effortlessly let go of the beautiful things that it possesses (the flowers) once their fragrance is beginning to fade off. It takes over the task of spreading fragrant joy at night; which is not shown by many trees. It’s like the night-duty guard who takes up the task which many will often not take up due to its lack of comfort. The tree has tremendous beauty. To call it one of the most pretty divine creations on this earth will certainly not be an understatement. Yet, the tree is not possessive of these beautiful flowers and lets go of them with ease. The flowers also fall so noiselessly. And tell us how to remain calm and endure your destined falls peacefully.

Indeed, dear Parijaat, you represent to me a steady calm mind, true selflessness and a gritty endurance in your own ways. You have a unique class of beauty and some of the loveliest colours in your flowers. The simplicity of structure of the flowers and leaves makes it even more appealing to me. I don’t know if I am right or wrong on this, but I cannot call you the Tree of Sorrow ever 🙂